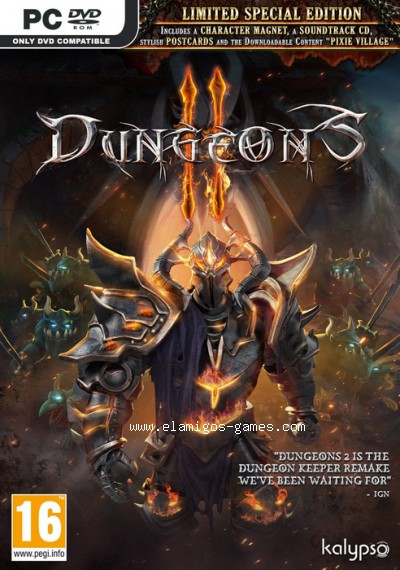 Download Dungeons 2 is now easier with this page, where you have the official version of servers Elamigos like DDownload, RapidGator, Googledrive, and torrent, download it now and get the updated game until last version.
The Lord of Evil has returned and this time he is no joke! In Dungeons 2, Evil tries to quench his thirst for revenge by recruiting terrifying monsters from all corners of the underworld to carry out his Machiavellian plan. However, this time he will not settle for dominating the underworld, but will try to exercise his power over the pathetic humans and, incidentally, conquer the outside world.
He takes the role of the mighty Absolute Evil and builds a network of unique and terrifying dungeons, recruits an army of terrible creatures, and leads two new sides. Prepare to defend your kingdom against annoying heroes, exit the underworld to declare war on human cities and use the "hand of terror" to directly control your subordinates, give them orders and occasionally slap them to keep them at bay.
The extensive campaign mode hides even more of the dark humor that made the original Dungeons a hit and is peppered with numerous references to fantasy books, movies and series. You can also test your skills against other Lords of Evil in four different multiplayer game modes with up to four players via local area network or online.

ElAmigos release, game is already cracked after installation (crack by 3DM or Ali213). Updated to version 1.6.1.30 (26.08.2016); included DLC: Pixieville, Morningwood, A Clash of Pumpkins, A Game of Winter, A Song of Sand and Fire, A Chance of Dragons.